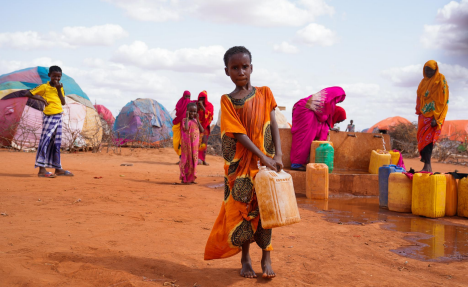 Today, Binance Charity, the philanthropic arm of Binance, the world’s leading cryptocurrency and blockchain infrastructure provider has announced its first Giving Tuesday campaign for the Horn of Africa, in support of UNICEF, the world’s leading organization for children.

Giving Tuesday is a growing global movement to give back during the festive period. The crypto community will be able to donate to the campaign via Binance Charity, which will match funding up to US$100,000. The fundraising campaign will launch on the 29th November and run until Tuesday 6th December.

All proceeds will go towards easing the suffering of children and their families living in Somalia, Kenya and Ethiopia in the Horn of Africa, which are all facing crippling drought and starvation, worsened by the impact of the war in Ukraine.

Helen Hai, Head of Binance Charity, “The devastating impact of the war on Ukraine has spread much further than the borders of Europe, resulting in a domino effect of devastation. Many of us are feeling the strain of increased fuel and food prices, but for those in the most vulnerable regions of the world, the implications are catastrophic.

Somalia is on the brink of a nationwide famine, as well as other countries across the Horn of Africa being pushed to desperation with crops failing, livestock dying and lives and livelihoods hanging in the balance. That’s why we’re rallying the crypto community this Giving Tuesday.”

By early October 2022, it is estimated that some 8.5 million people in the region – 4.2 million of them children – were facing severe water shortages, while 20 million required immediate food assistance.

As a result of the crisis, children are also at risk of dropping out of school to help support their families – and in doing so, face greater risks of exploitation, abuse or violence. Many families are also leaving their homes in a desperate search for food, water, pasture and livelihoods, exacerbating the levels of internal displacement due to conflict and political instability.

The funds for this Giving Tuesday campaign will support UNICEF’s emergency response, including the treatment of severe acute malnutrition, repairing strategic water systems and constructing emergency infrastructure such as latrines. Funds will also help provide education and protection services to children, including psychosocial support and psychological first aid.

The donation will be made in stablecoin (BUSD) on Binance Charity’s 100percent transparent blockchain enabled donation platform. Stablecoins bridge the world of cryptocurrency and fiat currency together as their prices are tied to a reserve asset, in this case the US dollar.

Binance Charity is a non-profit organization dedicated to unlocking Web3 as a powerful tool for social change. Its mission is to enable Web3 as a driver of social transformation by making its education and research accessible to all, and advancing global solutions for local humanitarian impact. Binance Charity uses its 100% transparent donation platform to build a future where technology is used as a force for good. To date, Binance Charity has supported over 2 million end beneficiaries through various projects. For more information, visit https://www.binance.charity/.